What Are My Books About?

The following discussion is in response to a challenge, hosted by Nigeria Lockley, in which I'm working through making my presence more visible to the world, to you.

What are the issues that I tackle in my writing?

The issues in my books are generally centered on someone getting over past offenses, self-inflicted or by others, to evolve and embrace what’s in front of them and propel them into a better, brighter, more fulfilling future.

How did you get here--was it through experience or through God speaking directly to you?

I got here, writing the kinds of stories I do, by way of a few personal experiences, but even more so, by observing others and traits then God helping me to interpret and better understand human motivations. Being a middle school teacher, I had to learn, be sensitive enough to not solely deal with the students’ behaviors but rather WHY the carried themselves the way they did. Doing so better prepared me to engage and instruct them to mature both academically and socially. Looking past people’s actions and into their WHY’s is a good philosophy when dealing with people and especially for writers when crafting character motivations.

Is this a pain point for you?

If there is something of my life that I infuse in any of my stories, it’s pretty much no longer a pain point for me. I honestly do seek to learn from my mistakes, experiences as to not commit them again. I also try to take heed and learn from what others go through around me and avoid their same outcomes if not profitable.

How has your writing healed you?

The art of writing healed me in the form of journals. When I journal, my heavy thoughts make more sense and in some cases, seem trivial and have prevented me from bringing up unnecessary issues to others. Because journaling soothed me so, I believe the stories that I write now will bring healing to others. As I said before, through my teaching experience, I became adept to studying human behaviors and motivations; perhaps, some things that most don’t even think of,. When I expose these traits and motivations via the characters in my books, I do believe that those reading find themselves at some point in the character’s evolution. From there, they can begin to assess how they can mature themselves, thank God that they already learned the lesson presented, or won't have to because they know how to avoid it.

What can or will you teach your audience through your writing?

I hope to teach through my books that life is meant to be lived, forgiveness is essential, giving and accepting love is fruitful among many other things things that are synonymous with one living their best life possible.

Writers are often asked who their target audience is. I shriek when asked that question because I would love for everyone to love my books, but I know that's not a plausible reality because readers have varying tastes. So in finally opening up to answer the question, I guess my audience is those, preferably not just women, who have formed viewpoints and traits based on past experiences, but new possibilities force them to deal with their past head on in hopes of embracing new and better opportunities. Some might call my main characters stubborn in trying to hold on to their old ways until life and/or people force them to see that letting go of yesterday's pain is worth it. The following images hopefully share the synopsis of each main character's issues in each book presented.

Again, I wish to engage, encourage, and entertain. 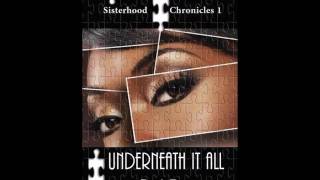 Pieces of Me: Underneath It All Poem

What Are My Books About?